Sally serves on the Board of the Arboretum Park Conservancy. In the past she has served as a  Park Overseer and member ofthe Kelleher Rose Garden Advisory Committee of the Emerald Necklace Conservancy. She is past President of the Board of Cogdesign, past Chairman of the Landscape Design Study Classes , the Landscape Design Council of the National Council of State Garden Clubs, and the Civic Development Committee for the GCF of MA.

In 2002 she received a silver medal from the MHS for “Outstanding Horticultural Community Service in New England.”

In May 2005, she won the Presidential Citation from the Garden Club Federation of Massachusetts for creation of four workshops exploring problems clubs encountered in public landscaping, as well as National Garden Clubs Award #68 for Videos of Workshops. 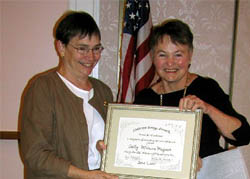 In November 2007, she was recognized at the annual meeting of the Emerald Necklace Conservancy for “invaluable volunteer service in support of the Kelleher Rose Garden and as a member of the Rose Garden Advisory Committee.”

In June 2017 she received a Lifetime Award from the Garden Club Federation of Massachusetts  for her many years of service creating civic development workshops.